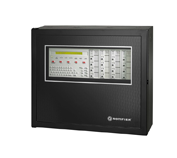 How would your business survive a fire?

In this age of just-in-time business, a company simply cannot afford a major interruption to its operations and financial future. If fire occurs, the first few seconds are critical. Your ability to recover quickly from a business disruption depends on choosing the best fire protection system agent for your particular application. Many times, the cost of downtime far outweighs the loss of equipment and structures. There is a critical need for a clean agent that will not contribute to further loss or downtime. The use of an efficient, environmentally acceptable, andpeople-safe extinguishing agent for occupied spaces is critical.

The AFP-200 is NOTIFIER's premier small intelligent panel. The AFP-200 is a compact, cost-effective, intelligent fire alarm control with a capacity of 301 individually identified and controlled points and an extensive list of powerful features. The AFP-200 provides capabilities that exceed most large intelligent systems, at a cost comparable to conventional control panels.

The AFP-400 is a compact, cost-effective, intelligent fire alarm control with a capacity of 563 points and an extensive list of powerful features. The AFP-400 integrates conventional output circuits, such as notification, telephone, and speakers, with the intelligent features of two signaling line circuits (SLC) and 396 intelligent/addressable points. It is also part of NOTIFIER's VIEW system.

Facility Monitoring/ On Site & Off Site